If you are here to submit a course evaluation, please do so here, and thank you. If you enjoyed this class, please mention it to any of your friends who may be considering signing up in the 2020/2021 school year. Word of mouth is the best advertising for the class!

Read on for the recap of our grand finale.

Today, we reviewed Newton’s Method for approximating roots and saw how efficiently it can find values of irrational quantities. But we also saw some problems:

We saw all three behaviors manifest in our analysis of f(x) = x³ – x, which has roots at -1, 0, and 1. Seeds to the right of 1 on the number line tend towards 1, as do some seeds to the left. But the local maximum at x = 1/sqrt(3) causes a “dead spot.” Moving further left, we find seeds immediately less than 1/sqrt(3) actually tend towards -1. Further left still, we find a narrow band of seeds that tend towards 1, then another towards -1, and so on, in shorter and shorter bands, until we find a pair of seeds that cycle between themselves. Any seed closer to zero than those cycling seeds tend to zero.

Gaston Julia and Pierre Fatou’s work that led them to the discovery of Julia Sets started with trying to understand when Newton’s Method “breaks” in these ways. Doing so for all possible functions proved too difficult, so they attempted to limit their analysis to purely polynomials. When that proved too challenging, they looked at iterations of rational functions only (instead of Newton’s method), then polynomials only. Finally they settled on analyzing z² + c, leading them to the discovery we have been analyzing.

The pattern we saw above in the real numbers is interesting enough, but pales to what happens when we move to the complex plane.

When we consider the function P(z) = z³ – z, we get a different pattern, shown below

This space is similar to that for c = .5, but you can see how the blue and green roots have moved (the orbit tending towards the new green root of .5i is shown; the blue root is now at -1 – .5i).

We can categorize a specific dynamic space created by a specific value of c by which root the orbit of 0 tends to. In both the dynamic spaces shown above, 0 tends to the green root (wherever that might be), so the pixel on the catalog view for both c = .5 and c = .5 + .5i would be colored green. For the dynamic space shown below (c roughly equal to 2), the corresponding pixel would be red

And for the handful of values of c for which the origin gets caught in a cycle, like the one below, the corresponding pixel in the catalog would be black 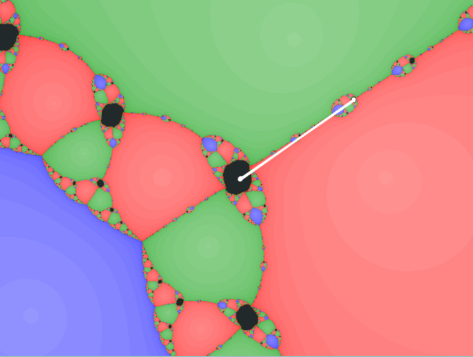 The space is largely mundane, with little “bugs” along the edge that show more unusual behavior. Let’s zoom in on one of those bugs 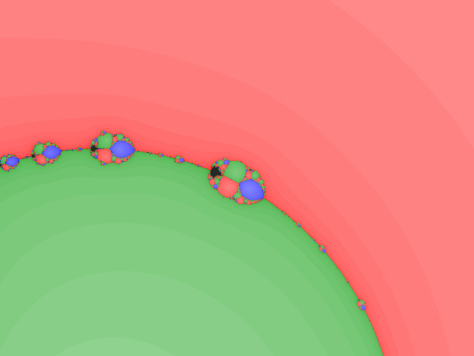 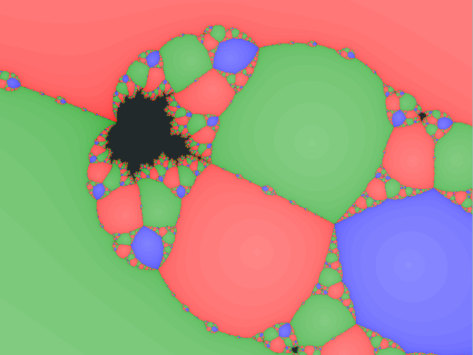 Whoa. That’s the Mandelbrot Set. It has no reason to be here! This is a catalog space of Newton’s Method on a cubic function, nothing to do with our previous derivation based on z² + c. What do the dynamic spaces look like? If we select the dynamic space somewhere near point A in the image below (what we called the 2-ball before)… 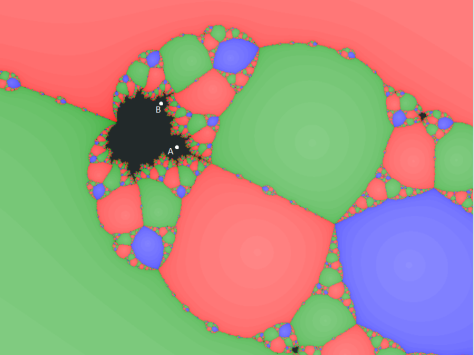 …we get the following dynamic space: 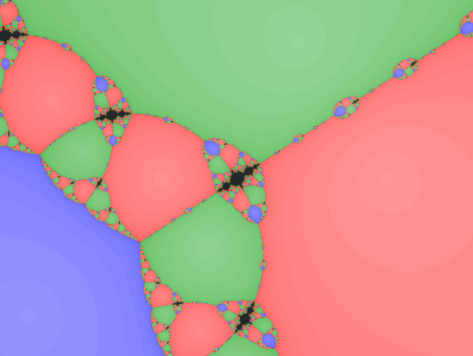 That’s the San Marco Julia Set! If we pick a dynamic space from the point marked B above (what we called the 3-ball), we get: 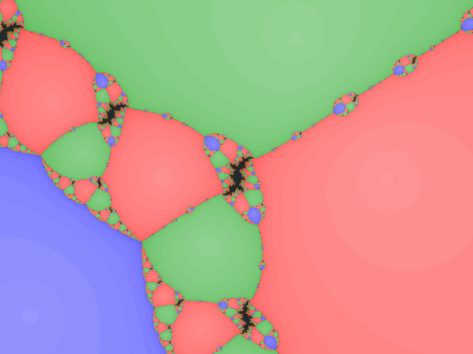 What this shows us is that the Mandelbrot Set is more than a simple curiosity. Its appearance here suggests that there is something universal to this set, and the Julia Sets that make it up; that they mean something important in the world of mathematics. Exactly what that is, however, is still unknown.

Thank you for reading!

This site uses Akismet to reduce spam. Learn how your comment data is processed.